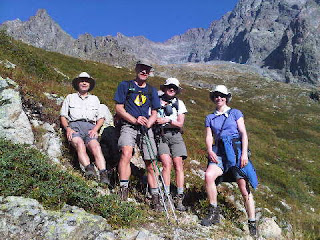 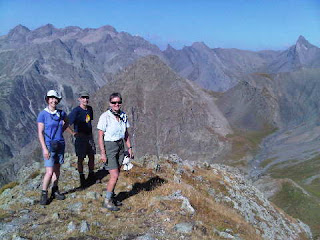 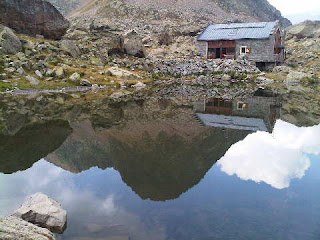 Another fine mountain day. Short, but with three high passes.

Dawn was again cloudless, and it took a few hours for the clouds to start building, so most of the day was spent in bright sunshine. After the traditional breakfast (coffee, bread, jam) in this traditional refuge we set off last of the thirteen guests, just before 8.30.

We managed 300 metres of the well graded 800 metre ascent to the Col de la Vallette before emerging from the shade of the valley into the sun cream zone. The others are pictured here (top).
Kev's guidebook refers to some 'scrambly pitches and narrow ledges' which we hardly noticed on this fine day.

After using Gillian Price's guidebooks we had got used to a fairly relaxed attitude to any difficulties presented to Gillian; Kev Reynolds seems to me to be just a little more cautious with his descriptions. This is not a criticism of either author, just a comparison of styles. Anyway, today's walk brings several warnings from Kev, and as on many mountain walks a slip could have been painful. But careful negotiation of the good paths across steep scree in the fine weather presented no difficulties to our international group. It would undoubtedly be harder in wet conditions, and walking poles were certainly helpful today, especially in descent.

Col de la Vallette is only 50-60 metres below a small 'pap' which promised fine views. So we went up it. And there were. I even took a video, first of the trip. A great viewpoint. Sue, Susan and Roy are pictured here (middle).

Back at the col we met Alain, a Frenchman on a day walk. He was about to leave. We persuaded him to go up the pap.

Two more cols were then visited. The first, Col de Gouiran, involved only 120 metres of ascent and was very easy. The second, Col de Vallonpierre, involved steep shaley scree on both sides of its narrow crest. We lunched here and I lingered at the fine vantage point for an hour or so whilst the others ascended a further 130 metres along the shaley crest to Pic de Vallonpierre (2738m), from where they got a good view of today's refuge.

A French backpacking couple shared my perch on the col. They were still there long after we headed off. Perhaps they would camp in the idyllic area around the source of the Torrent de Vallon Plat.

It's good to see these genuine backpackers, as this whole area is eminently suitable for that activity, with huge numbers of idyllic sites, though fixed camping is not permitted in the National Parks, so you have to move on every day. Fair enough.

It was an easy walk down to the perfectly located Refuge de Vallonpierre, where climbers Myriam and Daniel have been guardians for nine years. Contrary to Kev's information this is a CAF refuge, built in 2000 and still looking very new. (Pictured - bottom.)

On reaching there at 2.30, two litres of tea were in order. We enjoyed that, and some cake etc, whilst gazing up to the summit of Le Sirac, flitting in and out of cloud some 1200 metres above us. The refuge nestles beside a small lake. There's a resident telescope on the patio, with which to view eagles as well as climbers on Le Sirac. Today there were four climbers - two couples who had set off at 7am and who returned at around 3.30, in plenty of time to go down to the valley.

There are 13 guests in the 39 bed refuge tonight. We are in a dormitory for nine together with a family of four, who like eight others didn't turn up, so it won't be as cosy as expected. My feet will be next to Ken's head, so hopefully he can be silenced without too much difficulty.

We enjoyed another excellent meal tonight, in the engaging company of two sisters, Manon and Anne, from Grenoble, the former an aspirant chemical engineer, whilst Anne works in land management. Hello to both of you if you read this.

Next Day
Previous Day
Back to Index
Posted by Phreerunner at 09:53