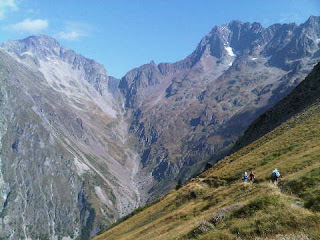 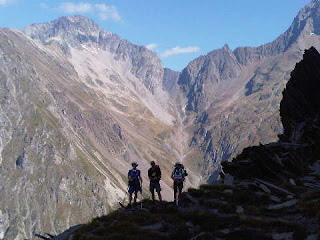 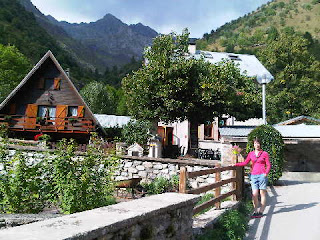 Whilst plying us with breakfast, Marie Claude told us that the village of Désert-en-Valjouffrey has only fifteen permanent residents plus a barking dog, a far cry from days of old - in the 1850s the population was apparently 200 to 300. The interesting house in which we were staying was built in 1788. Marie Claude's house may have been older - the dining room had a catacomb like ambience, with massively thick walls and huge broadening pillars supporting the floors above.

The forecast was for afternoon rain, so we got away at 8.30, expecting to get wet later. We didn't - the rain, just a brief shower, didn't arrive until after 5pm, so we enjoyed another sunny day on the GR54 trail.

The path up to Col de Côte Belle was unrelentingly steep until we got to some high, well graded zigzags. Having said that, we are 'match fit', so the 1050 metres only took us two hours.

There was a party in full swing at the grassy col. Lots of cameras were swapped and pictures taken.

Then Sue arrived, delayed by botanical diversions, and we had to start all over again.
We cracked open our packed lunches. The boiled eggs were delicious.

Our new found friends soon departed - we would all reconvene at the gite later - and we lingered for an hour at this great vantage point. Of particular interest was the view towards tomorrow's route over Col de la Muzelle. It looks easy enough until the final 200 metre ascent of a steep cone of black shale, grit and slate up to its 2625 metre crossing of the ridge linking Pic du Clapier du Peyron (3169m) and Roche de la Muzelle (3465m).

The top two pictures (I couldn't decide which I preferred, so I've included both) show the view towards the col (the lowest point on the horizon) from the start of our descent to Valsenestre.

Just 100 metres above the col, the summit of Côte Belle lurks enticingly. So much so that Sue, Susan and Roy felt obliged to visit it, for very similar views that Ken and I had from our spot on the col where we were guarding the bags against marauding Belgians.

Apparently the summit area was littered with large edelweiss plants.

The walk down featured an area of slate-like slabs - spiky and shattered, one of which precariously overhung the path. The vegetation increased as we got lower - shrubby stunted trees, then birch woodland, then larch, pine and fir trees.

Views towards the Col de la Muzelle steadily improved. We'll have enough to fill an album!

The rest of our packed lunches were scoffed at a path junction where we decided not to take advantage of the good weather to go over the col to Refuge de la Muzelle, but to risk that walk in tomorrow's forecast bad weather and descend to Valsenestre as planned today.

After passing some Belgian picnickers, we stumbled into the pretty village of Valsenestre at 2pm. The gite d'etape Le Béranger was very much open. 'JF' (Jean Francois - classical guitarist turned civil engineer), the Belgian camper, was enjoying a beer outside.

We soon settled into a relaxing afternoon at the gite (pictured - bottom, behind the tree), with the rest of the GR54 gang. There are twelve of us plus JF and two Germans who are camping nearby. The only other Brit is Steve, from Bristol.

Hélène is catering for us more or less single-handedly. She lives 'down the valley'. In fact all the summer 'residents' of this pretty spot live elsewhere. The whole steep-sided valley is shut in winter due to avalanche danger.

We enjoyed a fine meal at our 12 strong table, which became 13 when JF turned up in search of pickings - he's a 'poor student' - he got them. Cheers JF!

There's no signal here but a comment from Helen appeared at some point during the day. Hello Helen. This will probably therefore be one of a series of postings to be sent on Thursday, when we should get the first phone signal since Sunday lunchtime!

Next Day
Previous Day
Back to Index
Posted by Phreerunner at 09:51