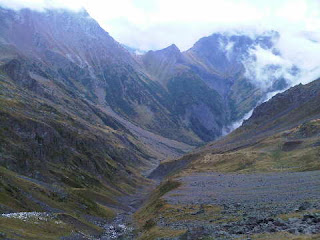 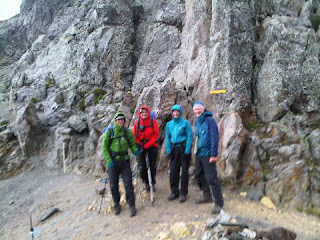 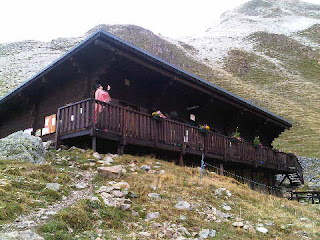 Basically, a wet day in the Alps.

We woke as expected to leaden skies, and as usual our little group was last to leave the gite, at 7.50, half an hour earlier than usual. This gave us fifteen minutes before a light drizzle drew attention to the need to don our waterproofs.

It wasn't a day for long breaks. The 1350 metre ascent to Col de la Muzelle was a steady plod taking rather less than three hours. By the time we got there the party ahead of us was about to leave, having seen enough of the sleet that was today's meteorological feature at the col. There had been some respite on the way up, with good views back to Col de Côte Belle, pictured - top, just to the right of the bobble that is Côte Belle. In fact our waterproofs came off for a while.

The ascent to Col de la Muzelle is noted in Kev's guidebook as being up a potentially difficult shale cone. Since his book was published, according to Hélène, the path was closed for three weeks in 2010 to enable it to be widened sufficient to be negotiated with safety in all but the very worst weather. Accordingly, it presented no problems at all today.

We found a sheltered spot on the col, where Ken arrived late and left early. The views, it has to be said, were limited, but at least we weren't in cloud, nor was it particularly cold. Steve was appointed as group photographer, and he performed the task admirably - see middle picture (Ken was long gone).

A rare (and very brief) phone signal delayed my departure, as the opportunity to catch up with these postings couldn't be missed!

Refuge de la Muzelle was clearly visible beyond a nearby lake, and was reached in about 40 minutes from the col. By now the drizzle had turned to rain, and the weather deteriorated further after our 11.30 arrival at the refuge. The bottom picture was taken later in the day when the rain had stopped. A blanketed resident is to be seen on the balcony of the chalet style refuge.

We are with the same people as last night. A friendly crew.

Whilst we had picnic lunches from Valsenestre, the allure of hot meals proved irresistible, so we enjoyed omelettes and pasta carbonara, leaving the perishable part of our packed lunches until later, and the rest for tomorrow.

Next Day
Previous Day
Back to Index
Posted by Phreerunner at 07:37