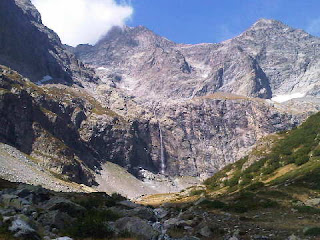 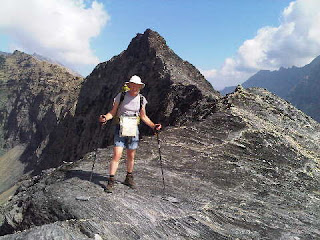 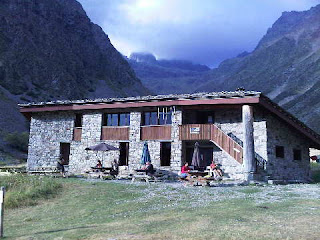 After breakfast involving lots of coffee and home made or locally produced jams and honey, we waved goodbye to Stéphane, forgetting unfortunately to record on film the refuge's solar oven (I'll have to delve into some Himalayan memories to locate a picture of something similar) or its outhouse, the view from which was the same as that on the last but one posting.

It was a cloudless day as we arose shortly before the 7.15 am dawn. The sun warmed us as we descended for an hour and a quarter back to Entre-les-Aygues, pausing frequently to admire the views back to the refuge, sited dramatically on a rocky outcrop.

Our path now rejoined GR54 for the rest of the day and beyond. A long bridge saw us safely across the Torrent des Bans, where we paused for a break in the sunshine before heading up the pleasantly shaded Vallon de la Selle - a long valley in which we commenced a 1200 metre ascent to the 2761 metre Col de l'Aup Martin.

We soon re-entered the Écrins National Park and were rejoined by the warm sun before we reached the Lacroix pastoral cabin, where two young shepherds seemed to have their hands full, with two large horses, half a dozen donkeys, a small but adventurous cat (it followed us up the hill) and substantial herds of cows and sheep.

Our first attempt at elevenses was abandoned due to excessive horse attention and slobber, but after the second and successful attempt we ambled on up the good path, with fine views (pictured - top) up the Selle's side valleys.

Lunch was taken on a grassy spur below the final 300 metre ascent over 'black scree' to the col.
Given the dry weather the ascent over the scree presented no difficulties at all, and we reached Col de l'Aup Martin soon after 2pm. The middle picture shows me at the col.

There were several others on the path today, and we joined one of them here - Gulian - walking GR54 like us, for the lovely contouring route to another col, Pas de la Cavale, before he went ahead on the final descent to tonight's refuge.

We paused at this second pass to admire a golden eagle, soaring so fast that Sue was unable to focus the binoculars on it, perhaps distracted by the din of squealing marmots, though I was able to catch it with the camera. Not a prize winning photo though.

Soon after starting our 1000 metre descent, the refuge came into view, but it would be a good two hours before we were down there enjoying beers in the warm late afternoon sunshine.

The zigzag path down had so many hairpins that it seemed like a walkers' answer to Italy's Stelvio Pass.

There were thirteen of us staying at the refuge. The rest were French. We were segregated. It was good to have a hot shower and a dormitory of our own, notwithstanding Ken's snoring, and the French were all very friendly, especially Gulian, who seems to be managing fine with trail shoes, and Jean Francois, who is camping nearby and seemed surprised that he was struggling to keep ahead of us today despite his heavier load. We must look very old!

After another good meal, darkness and bedtime arrived in quick succession. The end of another fine Alpine day.

Next Day
Previous Day
Back to Index
Posted by Phreerunner at 09:42